Do Dryers Eat Socks? An Explanation of the Missing Sock Phenomenon.

As your clothes begin to dry, their molecules heat up and bounce around. The motion leads to static electricity. What is static electricity? As regards clothing, certain fabrics tumble and shake within the dryer and shed electrons; this allows other fabrics to accumulate those free electrons. So some fabrics become positive and some become negative. And, as the saying goes, opposites attract.

Check the inside of your shirts and pants post-dryer for your missing socks. If that doesn’t help, then, yes, your dryer loves to eat socks.

When It Comes to Socks, Don’t Be an Einstein!

Albert Einstein did not understand the concept of socks. Whether sailing (which he loved to do), or attending a dinner at the White House, Einsten went sock-less. He thought shoes were sufficient for travel. To Einstein, socks are redundant.

Einstein must be immune to stench warfare. Good for him. As for the rest of us–don’t be an Einstein!

Socks Used to Be Made of Animal Skin: A Very Brief Survey of the Sock

Socks have come a long way since their inception in ancient Greece. The word itself derives from the Latin soccus, which was a loose-fitting slipper. The concept did not evolve from slipper to sock, either. Eighth-century Greeks used to wear matted animal hair for socks.

It wasn’t until 1589 when William Lee invented the first machine to weave socks. If necessity is the mother of invention, then Mr. Lee absolutely needed his wife free to pursue other tasks, because he cites Mrs. Lee wasting too much time weaving as the prime cause for his invention.

Today, of course, weaving socks is not on the daily to-do list…unless you live in Yiwu, China. This town is known for its sock exports; fittingly, it is called a “sock town.” In 2004, a factory in Yiwu exported three billion pairs of socks to Wal-Mart, Pringle, and Disney. For non-math majors, that amounts to six billion individual socks.

Nylon, created in 1937, now dominates the sock market. The socks of yesteryear were made of silk, wool, and cotton.

Were it not for the durability of nylon, the sock may not be able to endure superstitious tennis star Serena Williams, who wears the same pair of socks throughout a tournament.

I found an article from The Sun that states any player from the Fifa league must be sure their shinpad tape matches their socks. Since this rule has been put in place many players are calling it ridiculous since they just want to have fun. It may not seem important, but it goes to show you that it really does matter if your socks match (or in this case, shinpad tape).

You might not be a soccer player, but you probably don’t want to look ridiculous wearing two different pairs of socks at work, right? Black and White socks has been stressing this for such a long time, so whenever we see something like this in the news we always like to share it. If you want to keep wearing your faded or mismatched socks we can’t really stop you, but for everyone else, stop by blackandwhitesocks.com to order some fresh new pairs.

What do you think about this new Fifa rule? Is it understandable or unnecessary?

You might think that socks are only good for keeping your feet warm and preventing foot odor, but they may actually be healthy for you. According to Kansan.com if you wear socks to bed it may help you sleep better. You sleep better when it is cooler, so turn down the a/c, but keep your feet warm with socks. This tricks your body into thinking it is warm and forces your body temperature to go down and contributes to better sleep. Socks can also help your blood circulation which prevents swelling and allows your feet (and legs if you wear tall socks) to feel more relaxed.

So, when you think about grabbing your sandals, instead I suggest you grab your socks and sneakers before heading out the door. And when it is time to go to bed, put on those socks and get snoozing. We offer many different types of socks so be sure to browse through our inventory and pick out what you need. You will feel better and your body will thank you.

Your Freshly Washed Socks May Be Full of Germs

Science Daily reports that washing machines may not be killing the harmful germs that get onto our clothing. A study preformed in the UK found that even after going through a wash cycle, clothing had traces of the bacteria MRSA and Acinetobacter. MRSA can cause skin infections, urinary tract infections and pneumonia and is more likely to affect the elderly, children and those with a weakened immune system. The study found that in order for both forms of bacteria to be eliminated the water temperature must be 140 degrees Fahrenheit. If the water is only 104 degrees, it kills MRSA, but leaves Acinetobacter behind. It did mention that if you use an iron at 40 degrees after washing, it would kill off the remaining Acinetobacter. The article didn’t say anything about a dryer, but it seems to me that if you dry your clothes at a high temperature it would also kill off all bacteria.

Lower temperatures are being used in order to conserve energy, but it could end up causing us harm. The amount of germs that are killed can also depend on the type of detergent you use. Liquid detergents usually don’t contain bleaching agents like powder detergents do, and may not strong enough to clean effectively. It is best to always separate underwear and other clothing items from bed and kitchen linens. Lifehacker even recommends putting a cup of Listerine mouthwash in your laundry to kill bacteria. Just make sure to use one with no artificial colors and do a test run to be sure it won’t stain your clothing.

Hopefully this information hasn’t scared your socks off. Maybe you should go wash them again just to be sure. And if you want to read more you can find out more at the following sites: sciencedaily.com, dailymail.co.uk, lifehacker.com

Socks are great for warming up our feet and making sure they don’t stink up a room, but they have many other uses you may not have thought about. Real Simple made a list of “New Uses for Clothing” in which many ideas involved the use of socks. Here are some ideas with photos.

1. Place socks on the legs of furniture to protect your precious wooden floors.

2. Use a sock as a wine bottle bag. Give two bottles as a gift for a complete pair.

3. Use a lingerie bag to keep socks organized and prevent them from getting lost.

4. Place socks over your shoes while traveling to protect from dirt and damage.

5. Add some puffy paint to the bottom of socks to make them slip-proof.

6. Coffee too hot? Then slip a sock over your cup and drink up.

7. Place sunglasses inside mittens (or socks) to prevent scratches.

8. Protect your light bulbs by placing them in socks.

9. Keep cords together and out of the way with a trouser sock.

10. Does it snow where you live? Use a sock over your wipers so you don’t have to deice them. 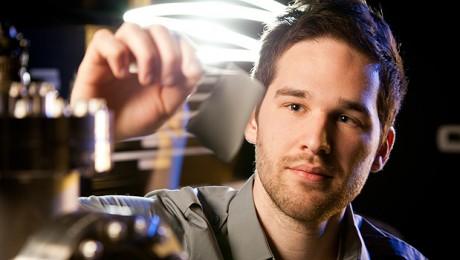 A fabric called Power Felt has been developed that could come in handy when our cell phone is about to die. The fabric is made up of carbon nanotubes that uses differences in temperature to get a charge. We give off so much body heat that doesn’t get put to any use, but with this technology we could harvest this body heat and convert it into electricity. Once the fabric is charged, you can put the power felt on your cell phone in order to charge the battery. It could also line the seat of your car, be placed under roof shingles to catch rising heat, or possibly be made into clothing.

A good idea may be to make Power Felt socks since our feet can get hot and sweaty while walking all day long. It may motivate us to work out longer in order to make enough body heat to “charge” our socks and use the energy to power our electronics. It may be a smelly way to gain power, but could prove beneficial, especially with the increasing search for new sources of energy.

If you want to read more about this Power Felt you can find the article on forbes.com.

The Poetry of Missing Socks

I found this cute poem by Shane Ward on authorsden.com. I think it helps make light of the frustration people go through while washing their socks.

Where do all the odds socks go?
It drives me to despair.
No matter how I wash the things
One goes to, who knows where?

Ten socks inside a pillowcase
And all of them are mine.
I pull them out once they are washed
To count them. Yep. There’s nine!

What is it with these wash machines?
I wish that it would stop.
So many socks I’ve lost in there
I could have filled a shop.

And why just socks for heaven sake?
It simply goes too far
I never lose a shirt, or vest,
nor underpants or bra.

Could the thing be eating them?
No. Somehow I think not.
Nor is it some strange payment
Like a laundermat type slot.

I wonder what would happen
If so sad a day will come
That in the wash machine I put
Not two socks – only one?

And if I sit by that machine
And Guard it like a sentry
Would I be surprised to find
The metal barrel empty?

Oh where do all the odd socks go?
I’ll never understand
The only way I’ll keep them all
Is wash the things by hand!

Last week, Rolling Stone writer, Jann Wenner, conducted an interview with Barack Obama. The last time Wenner interviewed Obama, he complimented Wenner’s bright socks. So this time Wenner had a gift for the president, two pairs of socks in salmon and black with pink stripes. Obama stated that “these will be my second-term socks.” There are many different ideas flying around about what he actually meant by that statement, but we can at least agree that Obama loves a pair of socks.

We may not carry the colorful striped socks that Obama received, but we carry the politically correct black and white socks. And for the record, our socks are most definitely worthy of first term AND second-term. If you want to read Obama’s interview with Rolling Stone you can read it here at rollingstone.com.